Everything is the other-being of the Other

Hegel’s political philosophy is highly complex. Its foundations lie in his general picture of philosophy. As we have seen, every philosophy always has the possibility to birth a political dimension. Like Plato, Hegel makes this move in Philosophy of Right: he takes his philosophy and applies it to politics, that is to say he finds an explicit place for political philosophy in the whole of his philosophical views. Through philosophy he explains political philosophy while at the same time explaining politics through its metaphysical dimension.
In this context Hegel is a classical philosopher, one who implicitly creates a political philosophy. Heidegger is completely right when he says, that when we understand Phenomenology of the Spirit, we can extract everything else from it. Two fundamental works by Hegel are usually given as reading: Phenomenology of Spirit and Philosophy of Right.
Hegel’s main idea is that first there exists a Subjective Spirit, a ‘Spirit for itself’ (Ger. der subjektive Geist). This point coincides with the theological thesis about the existence of God: the Subjective Spirit is God for himself. To expand himself for the Other, this Subjective Spirit projects itself into the Objective Spirit (Ger. der objektive Geist), in which it becomes nature and matter. This means that the subject projects itself into the object.
Pay attention to the fundamental difference between Hegel’s idea and the Cartesian topic, the latter of which decided the structure of the New Era. For Descartes there exists a dualism between the subject and object: Hegel on the other hand tries to remove this dualism and conquer the gnoseological pessimism of Kant by explaining matter or the object from the Spirit. Actually, this is nothing other than the development of the Kantian model of the absolute ‘I’, but taken in a dynamic, dialectical model. If Fichte is a reaction to Kant, then Hegel is a reaction to Fichte but in a constant dialogue with Kant and Cartesianism.
Thus, Hegel contends that there exists a Subjective Spirit, which expands itself into the Objective Spirit through dialectical alienation. The Thesis is the Subjective Spirit, the Antithesis the Objective Spirit or nature. Because nature isn’t nature. According to Hegel, nothing is identical to itself, everything is the other-being of the Other, which is why his philosophy is dialectical.

The cycle of emanation and return: the Absolute Spirit

In other words, there exists a Subjective Spirit an sich, which projects itself as Antithesis. The consequence is history. For Hegel the philosophy of history has a fundamental meaning, because history is nothing different than the process of the expansion of the Objective Spirit, which embarks to new stages through its spiritual component, which, in turn, lies in its foundations. But the first act of the Objective Spirit is to hide its spiritual characteristics and present itself as nature or matter; through history the other-being of Subjective Spirit is interwoven, and through the human being and human history it returns to its foundations.
But this is already a new foundation, not that of the Subjective Spirit (‘the Spirit for itself’), but of the ‘Spirit within itself’. That is to say, it returns to itself through its own alienation. A cycle of emanation and return appears; according to Hegel, the return carries more meaning than the emanation. The emanation creates the prerequisites for the return and the return, in turn, having completed the cycle, returns the Subjective Spirit, which becomes the Third Spirit, the Absolute Spirit (Ger. der absolute Geist). That is to say, first is the Subjective Spirit, then the Objective Spirit and then the Absolute Spirit.
According to Hegel, the Absolute Spirit expands through human history and ascends to the end of history. The meaning of history is the Spirit recognizing itself through matter.
First the Spirit has itself but does not recognize itself, later the Spirit recognizes itself but does not have itself. Nature an sich has historical antecedents, because it is an element of history. From here come the history of religion and the history of society, and as a result of the Spirit expanding through history it ascends to its culmination in the end of history, when the Spirit fully recognizes and has itself: Thesis, Antithesis, Synthesis. This is why history has ended.
This is a broad picture of Hegel’s philosophy, which has many nuances and complexities. Thus, according to Hegel, history moves positively, but this is a different positivism from that of the philosophy of the Great Mother. The Titanic beginning assumes that first there was less and now there is more. Marx removed the Subjective Spirit in his reading of Hegel and said that nature is nature perfecting itself. In doing this he re-established the philosophy of the Great Mother, according to which everything grows from matter, from nature.
But Hegel is not Marx. In Hegel this progress, this upwards movement is based on an earlier jump down. At first the Spirit jumps and falls in nature, and this is why nature begins to grow; nature is nothing other than the other-being of the Spirit. The Antithesis of the Spirit is not just its opposition, it is also it in a negated way. The concept of ‘withdrawal’ is very important to Hegel: the Antithesis does not destroy the Thesis, it negates it, draws it into itself, and then demonstrates it via Synthesis.
This is why the Thesis and Antithesis aren’t absolute. They are dialectically dependent. Only their Synthesis is absolute, through which the withdrawal of the Thesis and Antithesis occurs. This is the idea of Hegel’s concept of history as the expansion of the spirit through phases: the Subjective Spirit (pre-historical), the Objective Spirit (which appears through history), and finally the Absolute Spirit, which appears above the tension of history through the creation of a socio-political peak, a pyramid of the Spirit, which has become Absolute at last.

Hegel and the conception of the German state 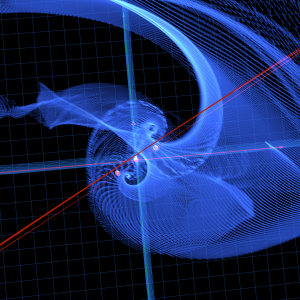